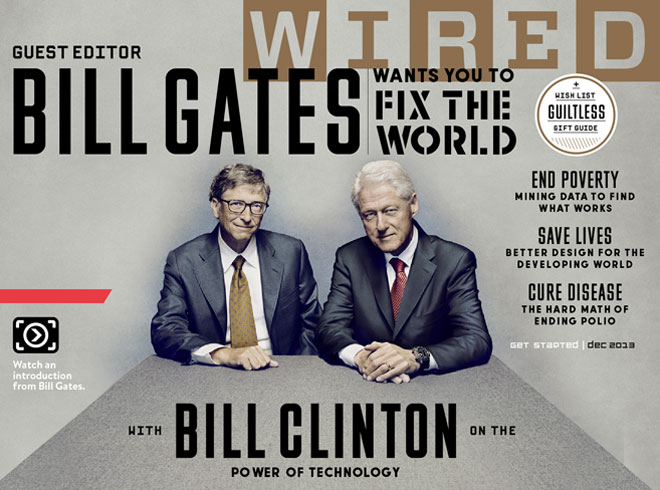 I just read an interesting article in the December issue of Wired.  The cover story of this edition is about an interview with the “Bills”, that is, Gates and Clinton.  As you may be aware, these men are founders of massive philanthropic organizations.  Gates founded the Bill & Melinda Gates Foundation and Clinton founded the Bill, Hillary & Chelsea Clinton Foundation.

The article (and interview) discusses some of Gate’s and Clinton’s ideas about how to better the future of the world.  The essence of their argument was this: if we want the world to improve, then we need to work together.  Globalism was inherent in nearly everything to the two tycoons said.

Of course, the benefits of globalism are debatable.  But there are bigger fish to fry at the moment.  Yes, I said it that way intentionally.  Globalism is a really big deal, literally (a really big problem in my book), but there are still bigger problems.  Let me explain.

Maybe the easiest way to get at it is to ask a question: what is good?  When Gates says “It was not ‘good’ for the world for the U.S. to generate 30 percent of the economic activity” what does he mean?  Or when Bill Clinton says things like “Congress needs to keep our future in ‘good’ shape” what does he mean?

And that’s the rub.  Who decides what the standard is?  Who decides the definition of good?  Who determines the yard stick by which we will understand “goodness”?  Take a guess.  I’ll give you three, and the first two don’t count (as my dad used to say).  Well, the billionaire philanthropists get to decide.  Which means the top 1% of the world are calling the shots about the future of the other 99%.  And you know what?  You don’t get to be a billionaire by being philanthropic; you become a billionaire by being a business man.  And I’m not convinced that “the Bill’s” philanthropy is not just more business in disguise.[1]

But there’s another big problem.  Technology is NOT going to fix the world.  I hate to break it to you, but it’s not.  Over and over again in the interview this assumption is made.  Technology is the key to our global threats.  Technology only makes human wickedness more sophisticated and appalling.

Technology isn’t “good” or “bad” in itself, what makes technology good or bad is how its employed, and that’s something that technology has very little to do with.  In other words technology is only as “good” as its inventors and consumers.

The world’s solutions do not lie with billionaire businessmen concocting new technological ideas and scheming about how their products can shove their foot in the third-world door first.

Jesus said that “There is nothing outside the man which can defile him if it goes into him; but the things which proceed out of the man are what defile the man… For from within, out of the heart of man, proceed… all these evil things” (Mark 7:15, 21, 23).

A man’s heart will determine whether or not he uses his baseball bat to play baseball or beat his wife.

The future of the world hinges infinitely more on the condition of man’s heart than it does the gizmo’s he holds in his hands.

And neither of the Bill’s said anything about that.

[1] In the article Clinton admits that his foundation is really a glorified “launching pad” for “projects benefiting the global good.”  It’s hard to imagine that the “global good” is not directly tied to the Clinton family’s financial portfolio.  Clinton gives a couple of examples of how his foundation facilitates business in the article.  I’m amazed at how his political side still comes out in all of this, conveying and packaging controversial ideas in a way that makes them publicly appealing.  Speaking of Google’s idea to use balloons that provide internet connectivity to the rest of the world where there is none, Clinton says “Connectivity can be incredibly empowering to the people at the bottom of the economic pyramid.”  But he then goes on to give examples in which he arranged deals where the “the six big banks” and the “biggest cell phone company” where involved in solving problems in South Asia.  Who benefits more here is highly debatable: the big banks and corporations, or those on the “bottom of the economic pyramid.”