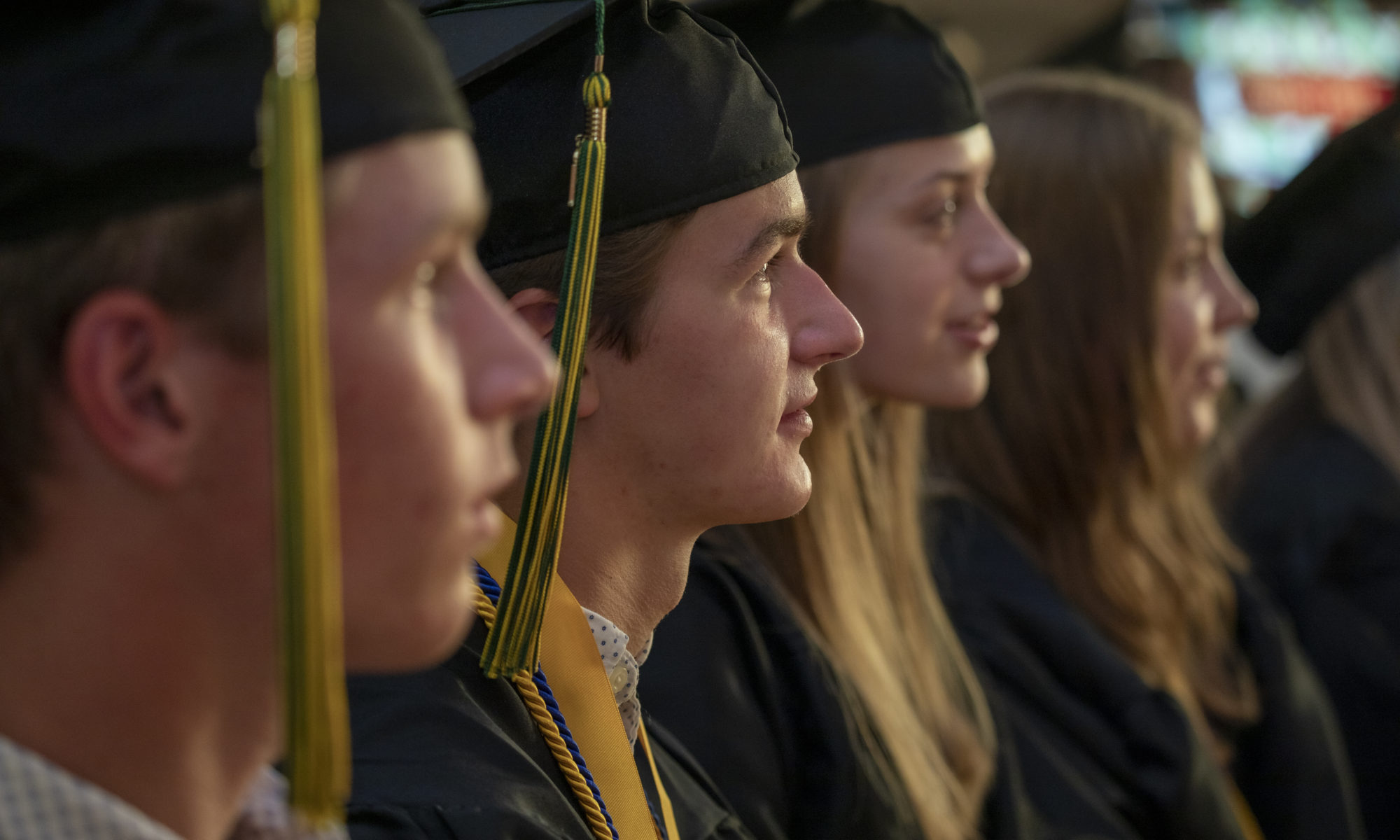 This message was originally given by Pastor Josh Moore at the recent White River Valley High School Baccalaureate service in South Royalton, VT.

I’m sure most of you are familiar with Charles Dickens’s novella “A Christmas Carol.”  It’s a story, published just before Christmas way back in 1843.  It’s about a man named Ebenezer Scrooge, who is an ornery, selfish, and mean old man that is visited by several ghosts.  After visits from his former business partner Jacob Marley and the ghosts of Christmas Past, Present, and Future, he becomes a much more generous, kinder person.

But because of that story, whenever you hear the word or name “Ebenezer” I’m sure you think of someone who is mean or unkind or of someone who lacks generosity and is very stingy.

But do you know the real origin of the word “Ebenezer”?

The origin is Hebrew.

I don’t know if you know this or not, but the first 2/3’s of the Bible was originally written in Hebrew.  Jews refer to these books as Torah, Nevi’im, and the Ketuvim.  Which means the Law, the Prophets and the Writings.

In the Nevi’im, we find a book by the title of 1 Samuel.  And it is there that we discover where this name Ebenezer comes from.

When you go to 1 Samuel chapter 7 what you find is a story of people in worship.  The people have done wrong and they are returning to God with all of their hearts.  They are turning from their wicked ways and asking God for His forgiveness.  They destroy all of their idols and their false gods, and one of their leaders, named Samuel, is leading them in worship and suddenly, their enemies attack.  Seemingly out of nowhere, they are being besieged.  Some men quickly assembled themselves to do battle and the text says that the Lord thundered loudly and sent their enemies into a confusion, so that they could not fight.  In the end, Israel was delivered from their enemies because of God’s help.

But to commemorate the victory that God gave them, the book says, “Then Samuel took a stone and set it between Mizpah and Shen, and named it Ebenezer, saying, ‘Thus far the Lord has helped us.”

In the Hebrew, the name Ebenezer means, “stone of help.”  The idea was that this stone would be a stone of remembrance; whenever an Israelite looked at it they would have a tangible reminder of God’s deliverance.

This is why if you go to Merriam-Webster.com and look up Ebenezer you will find this definition: “A commemoration of divine assistance” and a quote by Robert Robinson from a hymn he penned in the mid-1700s titled Come Thou Fount of Every Blessing.

He writes in one stanza:

Here I raise my Ebenezer;
Here by Thy great help I’ve come;
And I hope, by Thy good pleasure,
Safely to arrive at home.

-Robert Robinson’s “Come Thou Fount of Every Blessing”

Arrived by the Help of God

You’ve arrived at this milestone in your life and you did not arrive here on your own.  I encourage you to set up an Ebenezer if you will in your mind and thank God and thank those around you for their help.

But the journey is not over, is it?  In a way it’s just beginning.  This is the first chapter, in the rest of your life.  No doubt many of you will be heading in very different directions following your graduation.

What I want to say to some of you as one who finished high school in Charlotte, NC, in the top 4% of a class of over 700 students.  As one who graduated college with honors and went on to finish a master’s degree.  As one who was a successful student athlete in middle school, high school, and college.  I want to say to you: feel the moment, enjoy the moment, but do not forget to recognize your need for help.

When I finished college I was on top of life.  Things were good.  I had a good job.  Lots of friends.  Nice car.  At the time I was dating a beautiful girl who was playing college level soccer.  I felt like I had arrived.  But just around the corner, challenges were waiting for me that were out of my league to handle.  And I needed to learn to say “help.”

A day will come and may have already come for you when you will know your need for help.  Many don’t know what to do when that day arrives so they make very poor choices.  Instead of asking for help, they take their own lives; they look to drugs and alcohol; they look to sex and parties and good times and when the smoke clears the find themselves emptier than when they started.

Do you know the three leading causes of death for people in your age bracket right now: unintentional injury (which would include like drug overdose), homicide, and then suicide.  (See: https://cchealth.org/health-data/hospital-council/2010/pdf/11_lcd_by_age.pdf)

These causes of death are tragic–they are the result of despair, addiction or poor choices.

Don’t be a statistic. When you are empty and struggling–ask for help.

As a man who found help in Jesus Christ, I want to commend Him to you as the One who is able to rescue you whatever struggle you find yourself in. In my darkest hour I looked to Jesus when there was no one else, and He came to my rescue.

One of the ways that He did that for me was by sending me on a trip to the birthplace of Jesus, a little town called Bethlehem, in 2006.  Bethlehem is in a country named Israel, which is bordered by the Mediterranean Sea to the West, Lebanon and Syria in the north, Jordan to the East, some Palestinian territories, and Egypt to the south.

In 2006 I went on this trip not knowing what to expect really.  It was an amazing experience.  I brought home a few things, but the one thing I treasure most is this little rock.  [Holds up a white and brown rock about 3″ in length.] This rock came from the wilderness of Israel where it is believed that Jesus spent a great deal of time.  We may find that bizarre today with our highly distracted, entertainment focused life.

Back then people who wanted to seek God would often remove themselves from all the business of life and go out into the wilderness to be alone.  Where they could hear and think away from all of the distractions.  But the wilderness was a hard place.  Often wilderness pilgrims would fast for many days on end while in the wilderness.

We know that Jesus did this too.

Some of you may not know who Jesus is.  There are a lot of different narratives about Jesus.  Suffice it to say, that Jesus is the central figure in Christian faith.  He was a miracle worker and a powerful teacher.  Christians, like me, believe him to be more than just a mere man.  We believe that he was God in the flesh.  We also believe Jesus’ death to be more than just a death.  We believe it was the means of our salvation.  That God loved the world so much that he sent Jesus, his only Son, to die on the cross, so that whosoever believes in him will not perish but have everlasting life.

The life of Jesus of Nazareth was not an easy life.  Jesus knew pain.  Jesus was born to a teenaged mother.  Most everyone in the community thought her baby to be illegitimate so she was shunned by many, because the culture at the time was profoundly religious and moral.  Jesus grew up under the shadow of this assumption.  He knew what it was to be alone.  He knew what it was to be rejected and to struggle.  Yet I believe that in the end, Jesus overcame those struggles by His perfect faithfulness and dependence upon God.

When I look at this rock I remember that Jesus was in the wilderness.  That he understands the many challenges and pains of this life.  This has become for me a “rock of help.”  An Ebenezer.  Not because there’s anything special about the rock itself, but because it reminds me of one who is able to help me, namely God.

So you’ve received many good and helpful thoughts from a number of people this afternoon.  Now I want to encourage you to look to God.  This season is a season of rejoicing and celebration, as it should be.  But for many of you, a day will come when you will feel inadequate.  When you will feel needy.  And that’s okay, because truth be told, we are all needy and inadequate (in ourselves).

Look to God, look to Jesus, and He will help you.  And when he does, you will have your own Ebenezer, your own “rock of help” to tell others about.

Again, congratulations on what you’ve accomplished.  I truly wish you the best in the future.