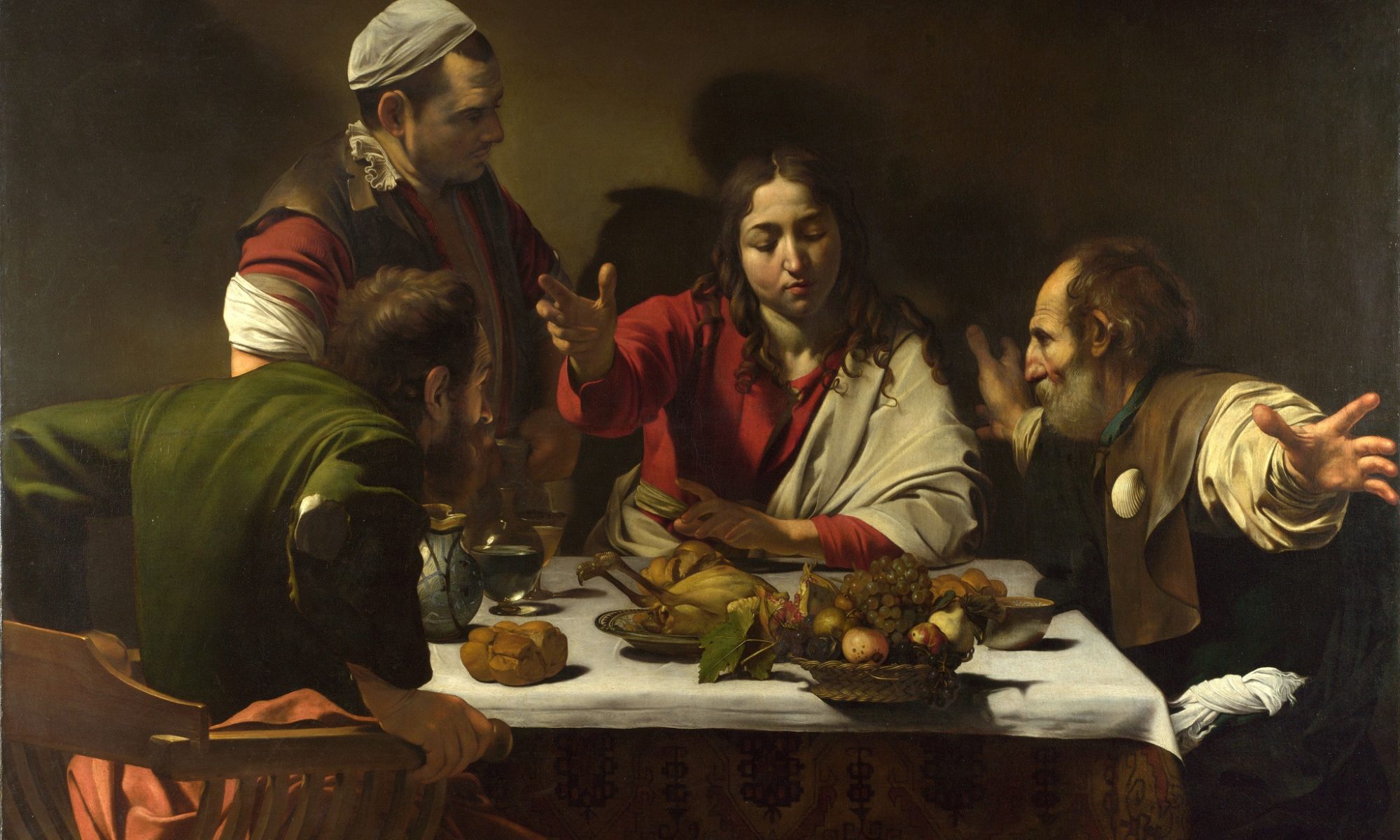 Do you have a favorite bible story? If I had to pick one, it would probably the story of Jesus appearing to the two disciples walking along on the road to Emmaus in Luke 24. My wife and I love this story so much we named our son “Emmaus”.

The Supper at Emmaus

There’s a painting titled Supper at Emmaus by a well known Renaissance artist who was called Caravaggio (pictured above). In the painting he is trying to capture the supper that Jesus shared with the two disciples he met along the road to Emmaus (Luke 24: 28-31).

He actually did two different paintings of this moment. This is the first of the two. Jesus is the central future with his eyes closed and hand lifted as he prays. The light is shining upon him, all the eyes are looking at him. He is the central figure. The painting is life-size (5 feet tall by six feet wide).

The two men seated at the table have just realized that this is Jesus sitting with them. One is so overcome he’s backing his chair up and also leaning in at the same time–like he doesn’t know whether to jump for joy or be afraid. The other disciple has his hands spread out either in worship or disbelief.

Try and imagine this moment. They’ve been walking with this stranger and then all of the sudden, after he gives thanks for the food, they see, this is Jesus—the man they saw brutally murdered and destroyed on the cross.

Caravaggio wants to capture in this painting that very moment when they realized Jesus was not only raised from the dead but he was right there with them in the flesh. Verses 31 and 32 say that Jesus then vanished and they begin to recount how their hearts burned within them as they talked with him on the road about the Scriptures.

Later they run out and get together with the 12 disciples and tell them what happened. Verse 35 says:

Then they told what had happened on the road, and how he was known to them in the breaking of the bread.

But one of the things I love about this painting is that it is inviting us in. Notice how there is an empty spot at the table and there is this basket of fruit almost hanging off. Christ’s right hand is lifted in our direction. Caravaggio is inviting us to this table with Christ and wants us to be a part of this supper.

You do not need to be special to sit at this table. Notice also how ordinary all the figures are. The clothes are not fancy. There are holes, they’re dirty. The guy on the right there has a red nose and looks as if maybe he has a cold. The room is plain. This is not a cathedral or a synagogue or some religious space. This is a very common home and yet there Jesus is and he is inviting us.

Hospitality is a very ordinary, everyday space that Jesus will often show up. And what an example we see here in these two disciples of Christian hospitality. These two eagerly longed for this stranger to stay in their home and visit with them for a while. Verses 28 and 29 say:

So they drew near to the village to which they were going. He acted as if he were going farther, but they urged him strongly, saying, “Stay with us, for it is toward evening and the day is now far spent.” So he went in to stay with them.

They longed to enjoy this stranger’s company.

Sadly, most of us Americans are not hospitable, at least not any longer. It used to be for a long time in America that you could just drop by someone’s house and visit and stay. It was not uncommon for people to host others for days on end if they were traveling or passing through. No more. Today we value our privacy and space more than we do showing hospitality to others.

These two on the road to Emmaus open their home to the Lord, even though at the time, they did not know who He was… He was just some stranger on the road. But they invite Him into their home to break bread with them.

The Scriptures call us to do such as well:

“Don’t forget to show hospitality to strangers, for some who have done this have entertained angels without realizing it!”

“Show hospitality to one another without grumbling.”

So invite someone over for dinner. Ask a person who is passing through to stay with you for an evening. We should be especially open to missionaries, bible teachers, or others who have a special calling to proclaim the gospel message.

This is one of those places where Jesus loves to show up. Perhaps we are missing out on deeper fellowship with Jesus because we are not hospitable to others.

By hospitality, I don’t only mean having people over. I mean a general friendliness and openness to others, even strangers. This is rare in these parts but it is often a place that Jesus will show up in our lives. I want to exhort you to seek to be hospitable as these two disciples on the road were that day.