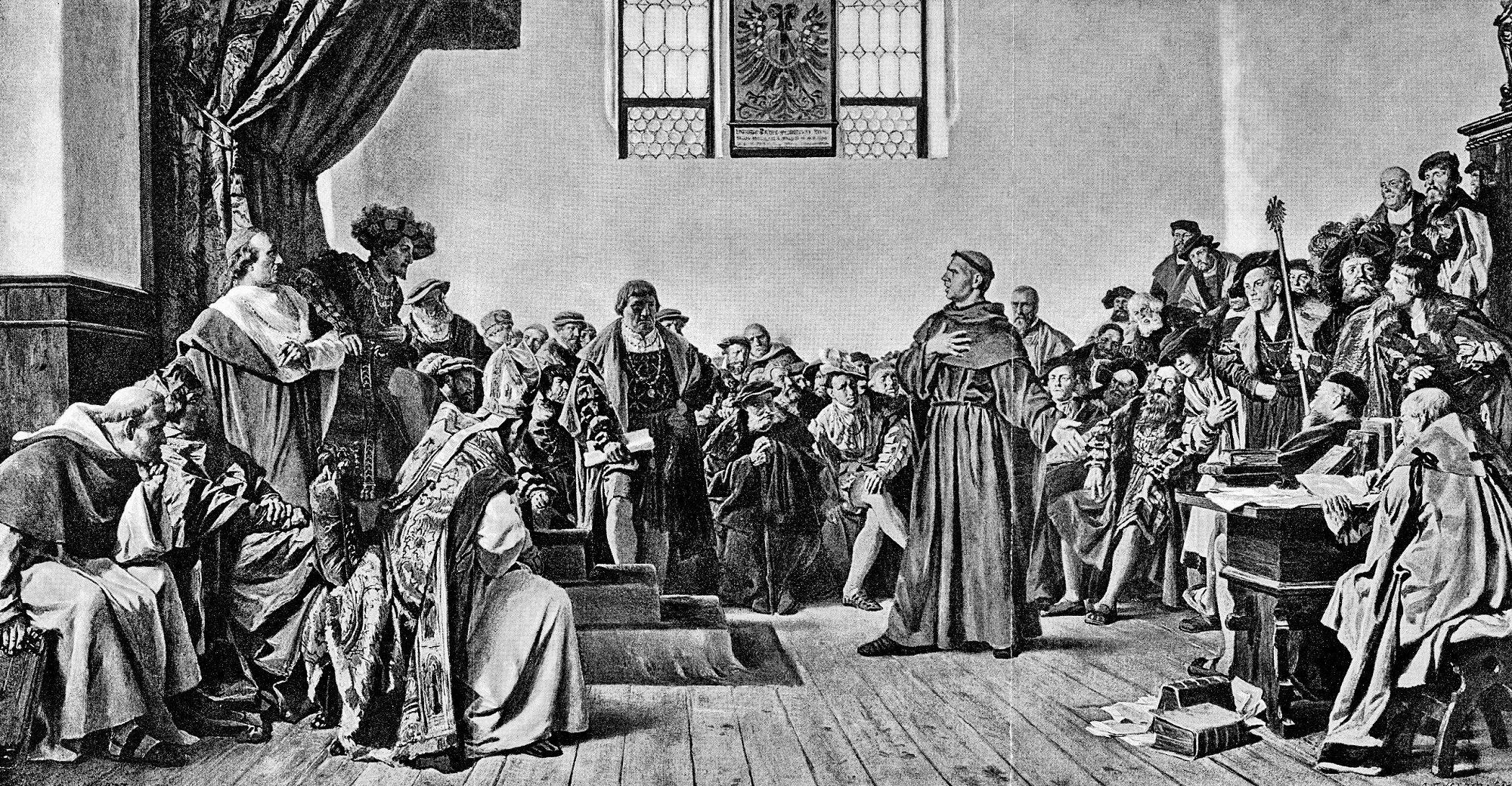 At Red Door Church here in central Vermont we are celebrating the Protestant Reformation for the sixth year in a row (since 2014).  One way we’ve decided to do that these last few years is by putting on an event we call, “Reformation Day Celebration.”  We open our doors during our town’s annual Fall Festival and invite people in to play Reformation themed games, eat seasonal foods, and look at our displays and booths which tell the story of the Reformation.

It is not uncommon that as I’m telling someone in our community about the event they ask, “What is the Reformation?”

I’m going to try and answer that question now.

Definitions only go so far, but let’s start there.  Alister McGrath, professor of Historical Theology at Oxford University, defines the Reformation as follows:

The term “Reformation” is used by historians and theologians to refer to the western European movement, centering upon individuals such as Martin Luther, Huldrych Zwingli, and John Calvin, concerned with the moral, theological, and institutional reform of the Christian church in that region. 1

In terms of impact, the Reformation may be one of the most important events in Christian (and world) history.  Yet sadly many Christians are uninformed about this massive event that eventually spawned the Protestant church.

When Did the Reformation Start?

As hard as it is to suggest one particular starting point for the Reformation, if there was one act that set it fully in motion it was the swing of Martin Luther’s hammer on the Castle Church door in Wittenberg, Germany on October 31st, 1517.  The document he fixed there that day would make him forever famous.  In fact, more books have been written about Martin Luther than about any other historical figure, except Jesus Christ, largely in part because of his actions that day.

The document he posted on the door of the church has been called the 95 Theses because in it Luther raised 95 concerns with the teaching and practice of the Catholic Church at the time.  You can read an English translation of the 95 Theses here.

Factors that Fanned the Flame of Reformation

There were various catalysts for the Reformation.  Maybe one of the most significant was what later came to be know as The Renaissance.  The Renaissance was characterized by a fresh interest in the literature of antiquity.  The Reformation therefore was not something new.  In fact, it was a passionate plea to go back to the things of old.  “The Reformers were never innovators, as the papacy was so often to allege, but renovators.”  2

One of the popular slogans around the time of the Reformation was ad fontes!, a Latin phrase meaning “to the fountains” or “[back] to the sources.”  A renewed interest in the study of original source documents and ancient literature had many looking to antiquity for inspiration.  The same was true of Christians.  Suddenly, many educated Christians (those who could read Greek and Latin) began to look to the Bible and to the church fathers instead of the Catholic Church and its traditions.3  What they began to see was that a great deal of accepted teaching and practice within the Catholic Church was out of sink with the Bible.

Another major factor was the invention of the printing press.  Just a few decades before Luther’s birth, around 1450 Johann Guttenberg invented the movable type printing process which allowed for the rapid printing and distribution of lengthy texts.  This would play a serious role in the dissemination of Luther’s writings including his 95 Theses, German Bibles and other literature, all of which were instrumental in educating the masses and allowing them to see the force of Luther’s arguments for themselves. 4

For more on the causes and various factors that played into the Reformation, read Russ Rohloff’s helpful entry “The Necessity of the Reformation” posted recently.

What Were Some of Luther’s Complaints?

(1) Indulgences.  One of Luther’s most serious complaints against the Catholic Church of the time was regarding what was called “indulgences.”  Below are numbers 27 and 28 in his Theses speaking of indulgences:

Part of the money made from indulgences was used in the building fund for St. Peter’s Basilica in Rome.  But here’s the way indulgences worked:

The Catholic Church had created the idea of the Treasury of Merit, sort of a “bank account” of merit deposited by Christ, Mary, the saints, and others as a result of their good works. When church members sinned, they could purchase an indulgence, which was akin to asking the Church to “transfer funds” from the Treasury of Merit to the sinner’s account. The indulgence basically excused the sinner from a certain amount of time in purgatory and/or temporal punishment for that sin. 5

(2) The issue of authority.  Sylvester Prierias, one of Luther’s staunch opponents in the Roman Church, wrote in response to Luther’s 95 Theses:

He who does not accept the doctrine of the Church of Rome and pontiff of Rome as an infallible rule of faith, from with the Holy Scriptures, too, draw their strength and authority, is a heretic.

(3) Distortion of the Gospel Message. Back in 1510 before Luther posted his Theses, he had made a trip to Rome as a representative of his Augustinian Monastery.  Though the trip was for church business, Luther had hoped that it would help him personally.  Ever since he began church as a boy, Luther could not get over his intense fear that God was angry with him.  He once wrote “If I could believe that God was not angry with me, I would stand on my head for joy.”  And his progress in the church only made his guilt and anxiety about his standing with God worse.  He was ordained into the priesthood in 1507, received his Doctor’s degree in theology in 1512 and was given the chair in Biblical Theology at the University of Wittenberg (which Luther held the rest of his life).  But none of it helped.

Rome was to be for Luther a time to find healing and help.   But God had very different plans. Instead of finding answers to his questions and help for his troubles, Luther left Rome frustrated.

It was not until Luther began to read the Scriptures for himself that he found help.  It grieved Luther that the pure gospel message of salvation in Christ alone through faith alone was obscured and distorted through the teachings of the Church at the time.  Most people, in fact, could not read the Bible for themselves because common Bibles were written in Latin and were extremely expensive.  What is more, the Church taught that the Bible was difficult and hard to understand and therefore should not be entrusted to the interpretation of the common man, but only the Magisterium (or teaching office of the church) could accurately interpret them.  Luther himself saw that not only was the belief of the Church untrue, but it prevented people from having access to the very thing that gave freedom to those suffering under guilt and the oppression of sin. 6   He writes in his book Bondage of the Will:

But, if many things still remain abstruse to many, this does not arise from obscurity in the Scriptures, but from [our] own blindness or want [i.e. lack] of understanding, who do not go the way to see the all-perfect clearness of the truth… Let, therefore, wretched men cease to impute, with blasphemous perverseness, the darkness and obscurity of their own heart to the all-clear scriptures of God… If you speak of the internal clearness, no man sees one iota in the Scriptures, but he that hath the Spirit of God… If you speak of the external clearness, nothing whatever is left obscure or ambiguous; but all things that are in the Scriptures, are by the Word brought forth into the clearest light, and proclaimed to the whole world.

Protestantism Born Out of the Reformation

After Luther’s death in 1546 the Reformation continued to spread and evolve.  Out of it was born the Protestant churches, which make up one of the three major branches of Christianity in the world today.